The Capilano Review is pleased to announce a new series of collaborative, limited-edition prints by artists and poets. The Quarto Series furthers the magazine’s long history of experimentation across image and text by inviting, for each iteration, an artist and poet duo to collaborate on a new print work.

Each edition is offset-printed on a single 14 x 18-inch sheet, then folded into quarters and enclosed in a special Quarto Series envelope.

Proceeds go towards supporting TCR’s ongoing work as a vital platform for experimentation in writing and art. 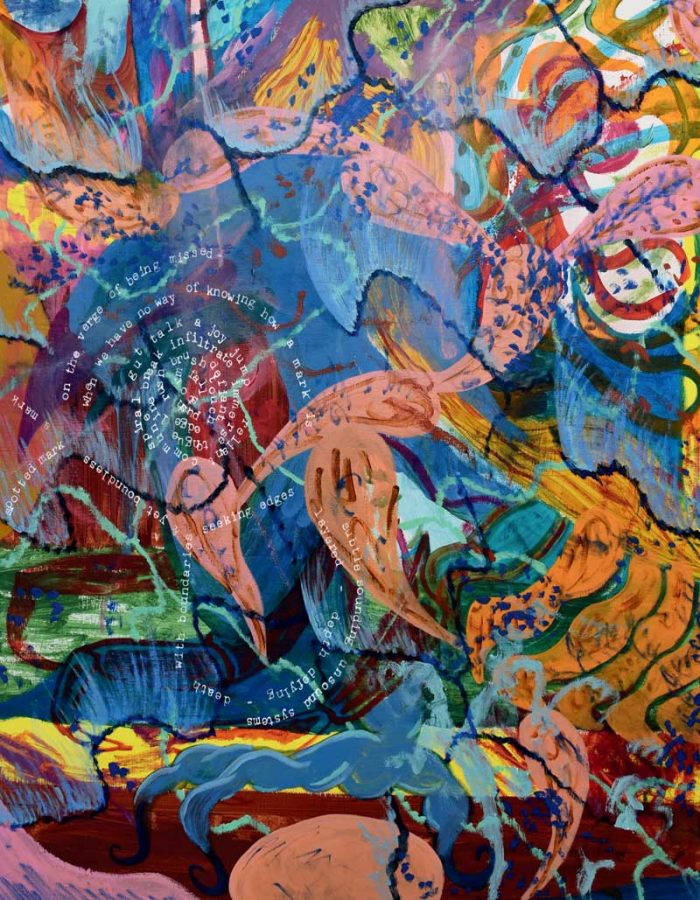 Patrick Cruz & Laiwan
Toward the boundless (fruit of the conqueror)
2022

In Toward the boundless (fruit of the conqueror), collaborators Patrick Cruz and Laiwan explore artistic strategies for working against formal, procedural, and colonial structures. The resulting work pairs Cruz’s maximalist resistance of an unwieldy apparition with Laiwan’s minimalist looping text that echoes the painting’s desires, hollows, and erasures.

Patrick Cruz is an artist, organizer, and educator born in Quezon City, Philippines. Cruz studied painting at the University of the Philippines, Diliman, and holds a Master of Fine Arts from the University of Guelph, a certificate in Pochinko clowning, and a Bachelor of Fine Arts from Emily Carr University of Art + Design. Cruz is a co-founding member of Kamias Special Projects (KSP), a curatorial collective that hosts the Kamias Triennial in his hometown of Quezon City. Cruz’s practice is informed by the intersections of folk spirituality, diasporic aesthetics, cultural hybridity, and the project of decolonization.

Laiwan is a cultural activist, artist, writer, and educator with a practice based in poetics and philosophy. Born in Zimbabwe of Chinese parents, her family immigrated to Canada in 1977 to leave the war in Rhodesia. Based on the unceded territories of the xwmə0kwəyəm, Skwxwú7mesh, and səlílwəta?l peoples, her collection TENDER: selected poems (2020) is published by Talonbooks. Her exhibition Traces, Erasures, Resists at the Belkin Gallery at UBC ran from January 7 to April 10, 2022. 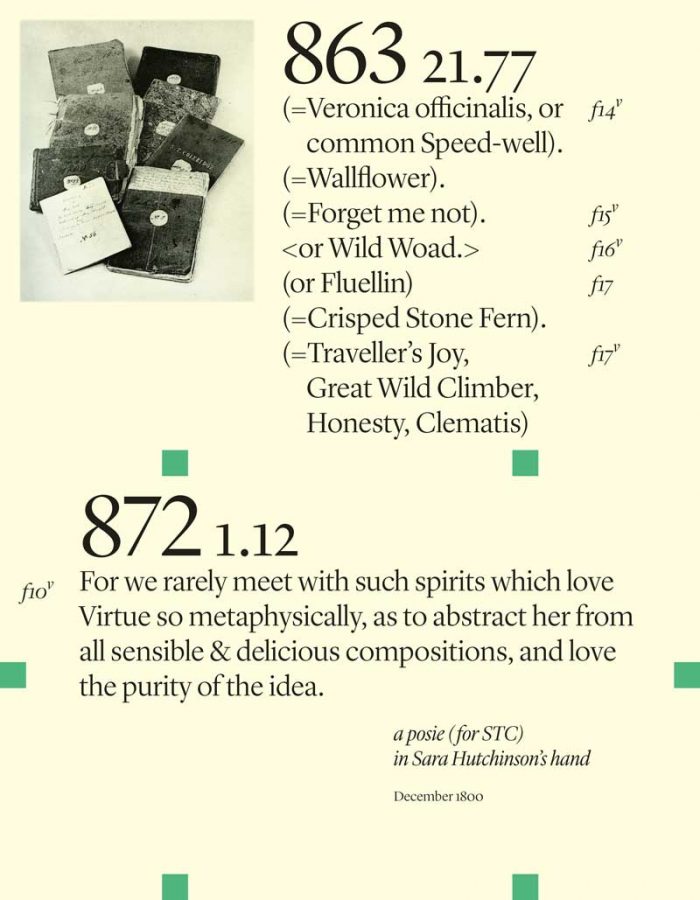 Sara Hutchinson’s Hand is a selective transcription from the notebooks of Samuel Taylor Coleridge. Though the poet permitted few others to open these deeply personal volumes, Sara Hutchinson, STC’s beloved, sometimes copied into them passages or pages from other texts for his reference. He may have requested that she do so, as she at times wrote out his poems for intimate circulation. In rare instances in her entries, she added to or supplemented the cited texts. Here, the index from a botanical handbook of common British plants and a fragment from the sermons of Jeremy Taylor, the seventeenth-century religious writer, receive Sara’s augmentations. The artists present only Sara’s additions to her transcriptions, from December 1800, retaining the punctuation, passage numbers, and foliation numbers as added in her turn by the notebooks’ editor and annotator Kathleen Coburn. This work is a negative image of Coleridge’s notebooks, containing none of his words, only the thinking of the two women, with the addition of Davey and Robertson’s own marks.

Moyra Davey is an artist and writer living in New York.

Lisa Robertson is a poet living in France. 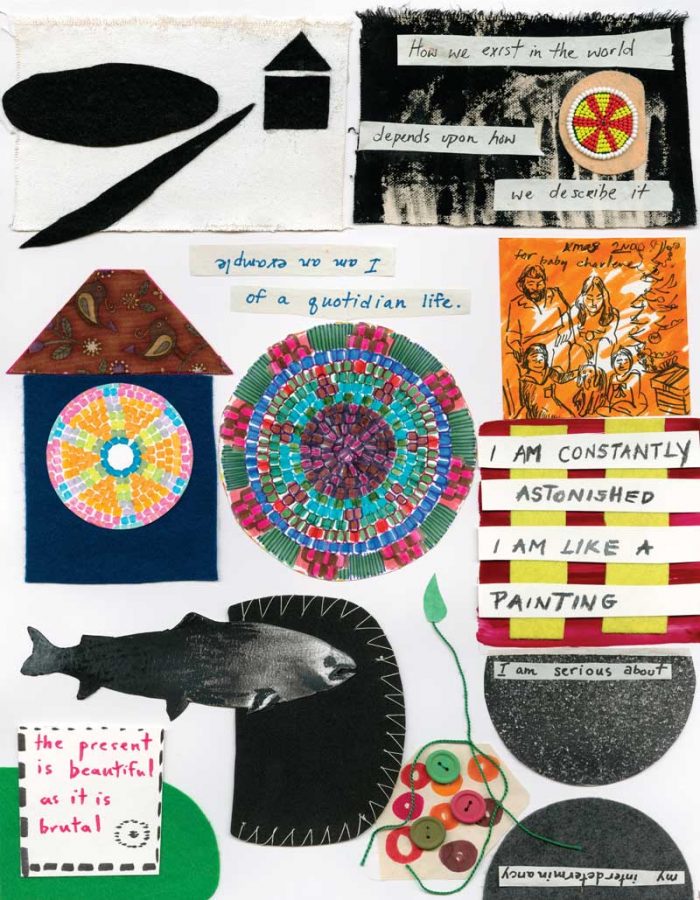 Billy-Ray Belcourt and Charlene Vickers
I Am Constantly Astonished
2022

A collaboration of image and text, Billy-Ray Belcourt and Charlene Vickers’s I Am Constantly Astonished encompasses a series of enigmatic and quotidian statements of resistance and survivance. Their art and writing act as beacons to illuminate, shield, delineate, protect, expose seams, bring together, heal, align, situate commonalities, and evoke futurity.

Billy-Ray Belcourt is from the Driftpile Cree Nation in northwest Alberta. He lives in Vancouver, where he is an Assistant Professor in the School of Creative Writing at UBC. His books are This Wound is a World, NDN Coping Mechanisms, A History of My Brief Body, and A Minor Chorus.

Charlene Vickers is a multidisciplinary urban Anishinabe Kwe artist based in Vancouver, BC. Her painting, sculpture, and performance practice focuses on colour, healing, land, Indigenous presence, and embodied connection to her birthplace. She is also a bass player and art educator. Recent solo exhibitions have been held at NADA, New York; USask Art Galleries, Saskatoon; and the Contemporary Art Gallery, Vancouver.