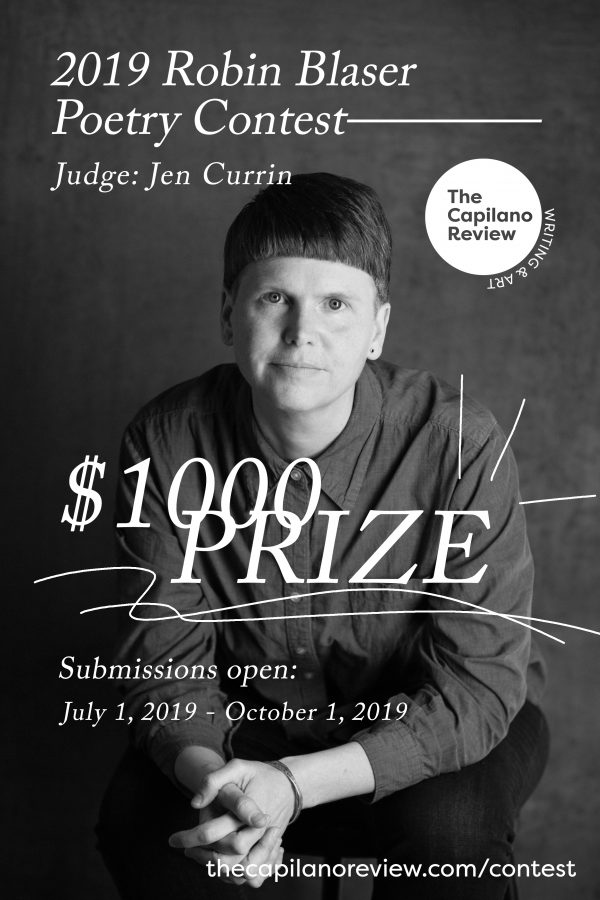 The Capilano Review‘s Robin Blaser Poetry Contest is back for its 9th year! The winning entry receives an award of $1000, plus publication in an upcoming issue of TCR.

“A political poem has to be a polis. And it means that you’re going to have to include within the political poem the notion of polis so that you let men, women…all kinds of people, let them have their lives within it.”
These words were spoken by Robin Blaser in a 2006 interview. Blaser also famously penned a series of poems called “The Truth Is Laughter.” In this year’s contest, we are looking for poems that consider and question the idea of a polis and the idea that laughter is a form of truth.
Judge: We are pleased to announce that the 2019 contest will be judged by Jen Currin.
Submission window: July 1, 2019 to October 1st 2019, via Submittable (link is live!).
Fee: $30 for Canadian entries, $40 for US/international entries
Length: Maximum 6 pages per entry.
*Each entry includes a one-year subscription to The Capilano Review. If you already have a subscription, we will extend your subscription or sign up a friend!
*Please include your name, email, and mailing address on the cover letter but no identification on the pages of the poem/s.

Jen Currin is the author of Hider/Seeker: Stories, which was named as a one of The Globe and Mail‘s top 100 books of 2018. Jen has also published four poetry collections, including The Inquisition Yours, winner of the 2011 Audre Lorde Award for Lesbian Poetry, and School, a finalist for three awards. Jen lives on the unceded territories of the Qayqayt Nation (New Westminster), and teaches writing at Kwantlen Polytechnic University and the University of British Columbia.
Submit

Buy One / Gift One This December