Trauma, Witnessing, and Voice: On Janet Gallant and Sharon Thesen’s The Wig Maker 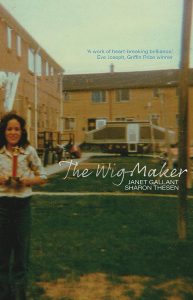 The thing about The Wigmaker (New Star Books, 2021) is the way that the trauma experienced by one woman, Janet Gallant, is documented and realized in poetic conversation with another woman, the poet Sharon Thesen.

Together these women, beginning in the Okanagan wildfire season of 2018, share friendship and words—the words entry points into the work of Janet Gallant, a wigmaker (the book also includes photos of a wig maker’s work in process: a mannequin head partially pinned with strands of hair appears in the text, eerie and haunting).

The reproduced snapshots and poetic renderings interweave to tell of the lives lived of Ms. Gallant and her family members. The polaroid images are of the kind found in many a suburban household in the last century, showing father, brother, mother, daughter, but their fractured lives are the furthest one might imagine from benign.

Take a look at the photos: how could you ever tell?

A white man sits on the steps of the front porch beside a black man.

A black woman in a dress smiles her beauty into the gaze of an unknown photographer.

The thing about documents is the way stories and voices get left out.

The thing about poetry as witness is the way they get back in. Maybe poetry is the medium for pain as a documentary source.

The thing about the poetry in this book is the way the lines and images cohere. Janet’s voice, embodied by Sharon’s poetry, tells us what this young black woman, poised and pretty, will endure and what will happen to her. To read the poems as historical documentation of a hidden life, a silenced voice, is to enter a dimension that forces both inquiry—how can this have happened?—and also an understanding of the reality of what many endure, behind the closed doors of a home. As Janet’s witness underscores, it happens all the time.

Who are we, anyways, to think that we know anything about another living soul? I wonder, if I were to meet Janet, having not read this book, would I, should I, have even a clue about—

The thing about Janet, if you ever have the privilege of hearing her, as I did at the virtual launch of this beautiful, disturbing, elegiac documentation of pain and resilience, is the utter rejection in her bearing, her voice, her being, of that word, victim.

Janet’s strength and intelligence about her own journey, and Sharon’s skill as a poet, banish abject victim fetishization from the page.

The thing about The Wigmaker is the way Janet’s voice, revealed in the words recorded, transcribed, selected, shaped, and crafted by the poet, Sharon, performs a song of the power residing within heartache. Janet/Sharon’s narrative frames a historical record of what goes on, behind the doors we keep closed, in the basements, down the staircases, in the bedrooms of the nation.

Janet and Sharon allow the horror of physical abuse and the sorrow of what can happen in that sacred unit, The Family, to co-exist with the strength and passion of the woman, Janet. Woman presenting as whole, and indeed made whole by the power, somehow, of her love for her daughters and her husband. Woman at night, stitching hair by hair, a new wig for herself and for others.

The thing about the two of them in tandem is the way they support each other.

I lingered a long while on this book. I wanted to situate my reading in the choices Janet makes to let the rest of us into her life. She chooses a poet to help tell her story, a searing testimony, pain-filled and as told by Janet/Sharon, fully alive.

The Wigmaker was published by New Star Books in 2021.

From the Archives | September 2021 | On Coming to Know