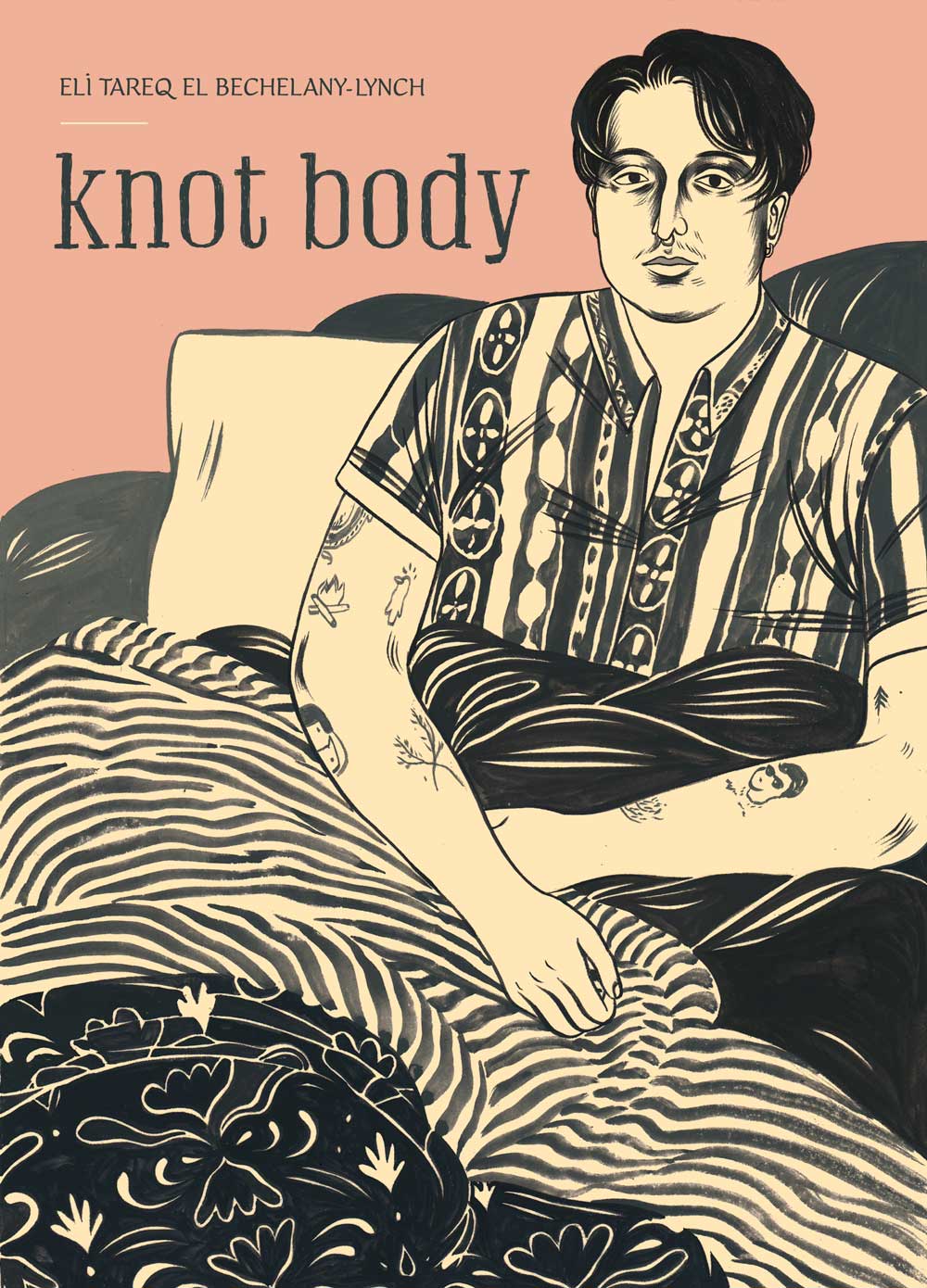 It’s corny, not to mention insulting to the physical demands of childbirth, to compare releasing a book to having a baby, but because I’ve been friends with Eli Tareq El Bechelany-Lynch for many years now, I can’t help but feel like a quasi-uncle to knot body, their debut collection, recently published by Montréal’s Metatron Press. I only mention this to provide you, the reader, with some context for my relationship to the subject of this review. For example, I was going to infer my friendship by referring to the author by their first name, but then I thought readers might interpret the gesture as disrespectfully casual, and El Bechelany-Lynch is a clever and compassionate writer whose work deserves respect.

If I seem preoccupied with questions of reader interpretation, it’s because knot body addresses several potential readers at once. The collection, which incorporates essays, poetry, memoir, and hybrid combinations of the three, is held together by a series of letters addressed to “friends, lovers, and in-betweens,” a group ambiguous in its makeup and size. “It is unclear to me who is reading and who is not,” writes El Bechelany-Lynch, “so we must live under the assumption that you are not the intended audience. We must also live under the assumption that you are.”

knot body is a book about chronic pain, its various sensations and manifestations, but El Bechelany-Lynch is equally concerned with the discursive. “I am desperate for a larger vocabulary to talk about my pain,” they write, pointing towards the limits of language as an expressive tool, as well as the hegemonic structures that frame discussions of the body. When questioning why trans people are so often excluded from medicalized narratives of chronic pain, they write that “the answer seems obvious, a kind of laziness . . . a frequent disregard for what life might look like for someone else.” El Bechelany-Lynch explores these institutional discourses alongside more casual exchanges between friends, lovers, and in-betweens. How do we discuss our bodies, our illnesses, and our abilities with a doctor? How do we discuss these things with a lover in bed? knot body fills the space between those two conversations. El Bechelany-Lynch deftly moves from micro to macro, shifting from the close embrace of the epistolary to the more public tone of the polemic. Sometimes they refer to their particular condition as fibromyalgia, and at other times, simply as fibro.

knot body approaches the high stakes of its subject matter with refreshing levity. One poem introduces us to a pain known as Betsy, “a big bowling ball dyke knotting her way into my shoulder.” El Bechelany-Lynch slyly observes copies of The Body Keeps the Score, Bessel Van Der Kolk’s cult classic book about traumatic response, “in the hands of every queer on the queerest bus in Montreal.” Later, they write, “I tell Bessel, I’m only 25! You gotta think it’s funny that I feel 80.” In these moments of humour, El Bechelany-Lynch elides a reductive narrative of marginalized suffering, and in doing so, they refuse to submit to the voyeuristic gaze of power. “Bessel thinks it’s sad,” they write, “and this is when I ditch him.”

knot body is not a trauma porn memoir, nor is it an instructional guide to living with chronic pain. El Bechelany-Lynch provides no solutions, nor do they absolve readers of their ableism, their transphobia, or their white supremacy. Instead, El Bechelany-Lynch complicates, probes, and asks questions. knot body joins a growing canon of writing about illness and disability through an explicitly queer lens that includes work by Eli Clare and Leah Lakshmi Piepzna-Samarasinha, both of whom are referenced throughout the book. By adding their perspective to this multiplicity of voices, El Bechelany-Lynch acknowledges the power of a collective to reframe the way we talk about our bodies. “we are not the cure,” they write, “or the shapes we take to survive. we move in packs, visually diverse yet connected at our cores, pieces of truth emerging in group, through laughter, through our own songs intermeshed, through our battle cries, creating the loveliest blend of sound.”

knot body by Eli Tareq El Bechelany-Lynch was published by Metatron Press in 2020.