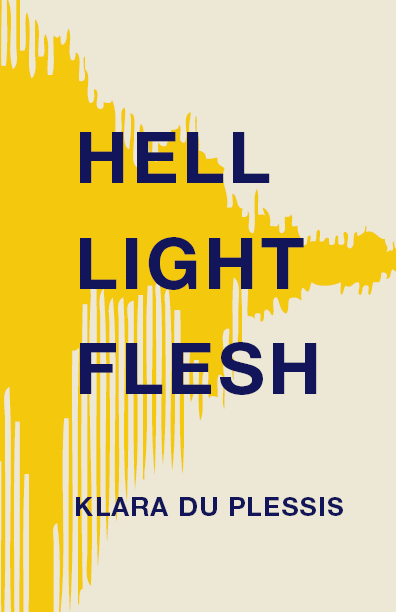 In her new poetry collection Hell Light Flesh, Klara du Plessis delves into the heart of linguistics in an attempt to do with language everything that surface linguistics denies the common speaker. Hell Light Flesh takes all words at face value, and, through the process of repetition and introspection, reveals the primal abstraction of all language and speech.

In the poem “HAND” we read: “Ow / Owl / Ow’ll / like some new kind of 1st person / accidentally saying I’ll (isle) I will.” Here meaningful play on auditory perception permits du Plessis to use the full spectrum of linguistic sound to map a schema of neurological pathways, giving new meaning to the illegible.

The book is a collection of three long poems: “HELL,” “LIGHT,”and “FLESH” each forming a layer of the poetic corpus. It also contains audiographs: light waves of once- legible sounds abstracted into illegible scratches on paper, “leering behind the ears” and “pulling the hair.” Through play, du Plessis acts as a cartographer of the artistic mind, circumnavigating the nodes that certain sounds or concepts have burned into it.

While the poet’s debut poetry collection, Ekke, was an exploration (and even to some point a demonstration) of surface linguistics and their comparisons, Hell Light Flesh takes on and nestles the reader within the linguistics of Art, and, once comfortably at cruising altitude, begins to question the fundamentals of “artistic rhetoric” and the violence it can ensue on idealized and realized bodies. In the poem “LIGHT,” du Plessis writes that “the act of proximity to an artwork, / whether from the perspective of the viewer /or the maker, is an activation.” And yet, elsewhere in the poem, the same activation-by-proximity also presents a possibility to “hurt art.”

Violence is shown to be the hierarchical loci of control, a status quo constructed upon the linguistic powerplay of the artistic world. Here and elsewhere du Plessis shows both the importance and impotence of language when faced with violence — whether personal, familial, or structural. The surgical precision with which du Plessis approaches language throughout Hell Light Flesh shows a profound knowledge of aesthetic modes. But rather than add to the platitudes of artistic expression, du Plessis uses her incisive knowledge in order to rebel against them.

Hell Light Flesh is a book one can read endlessly and always reach new morsels of meaning. This is a book of poetry that manufactures its own poetics, creating new landscapes of artistic expression in the process. ■