One of 9 pieces of art and commentary in the issue:

At 19.5 metres high, this concrete, steel, and neon cruciform stands at an East Vancouver intersection like Rio de Janeiro’s Christ the Redeemer and is visible to those wealthy enough to afford cliff-top homes in West Van. Although widely-admired by those who live within the city’s historic working class and immigrant east side, initial criticisms of this 2010 Winter Olympic commission focused on the artwork’s Christian iconography, accusing it of reviving the WASP monoculture that flourished in Vancouver until the late-1970s. However, for those who grew up with this symbol written in felt pen inside Stanley Park toilet stalls or carved into bus stop benches in Kerrisdale, it is a mark of pride, one that traces the outward movements of those whose otherness is synonymous with their invisibility, something the artist experienced as a teenager every time he stepped from neighbourhoods like Strathcona or streets like Kingsway. 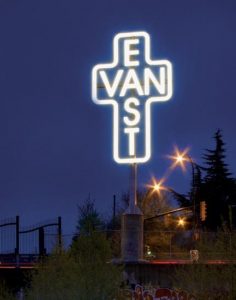 Photo courtesy of the City of Vancouver Public Art Program.

from qeqen: A Walking Tour of Musqueam House Posts at UBC