Read an excerpt from Ted Byrne’s “Justice is a Woman: Reading Genève” in TCR 3.24:

Genève is a serial poem based on a shuffle of the major arcana and court cards of the Swiss Tarot deck, also called the 1JJ deck because it replaces le Pape and la Papesse of the Marseille deck with Jupiter and Juno. It is not insignificant to its reading that the poem makes use of a Protestant deck. One dimension of the poem is that of marriage, “binding” according to Paul, but “made not too strong,” or perhaps not strong enough, according to experience and the vicissitudes of the drives (the “luminous arrows of heaven we inhabit,” 14, XVI The House of God).

A serial poem consists of a sequence of stanzas, or rooms, that are not constructed according to a plan. It is made of a series of forgettings that persist and return. Using the Tarot procedurally to structure the poem may seem to contradict this description, but it actually introduces a complementary element of chance that is not, in the non-occult practice employed, undermined by the pre-existing emblems or tableaux.

Genève is a translation of the Tarot cards in much the same way Kerrisdale Elegies is a translation of Duino Elegies. Both translations can be seen as acts of disrespect or of hubris. The targets merit disrespect: Rilke’s snobbism; the Tarot’s 19th-century appropriation of a good card game to mystic hocus pocus. The translator, as poet, hubristically invests himself with a poetic license to kill, so to speak. Not servant but master. Not fidelity but betrayal–“betrayal by augment” as George Steiner says of Rilke’s translation of Louise Labé’s sonnets. From this perspective, the poetic act has priority, is always prior to what is being translated. . . . 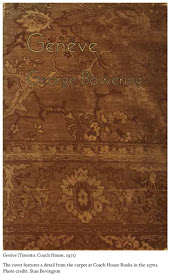 Catriona Strang with Kelly Haydon: Reveries of a Solitary Biker