A Record of Meeting — On Miriam Nichols’s A Literary Biography of Robin Blaser: Mechanic Of Splendor 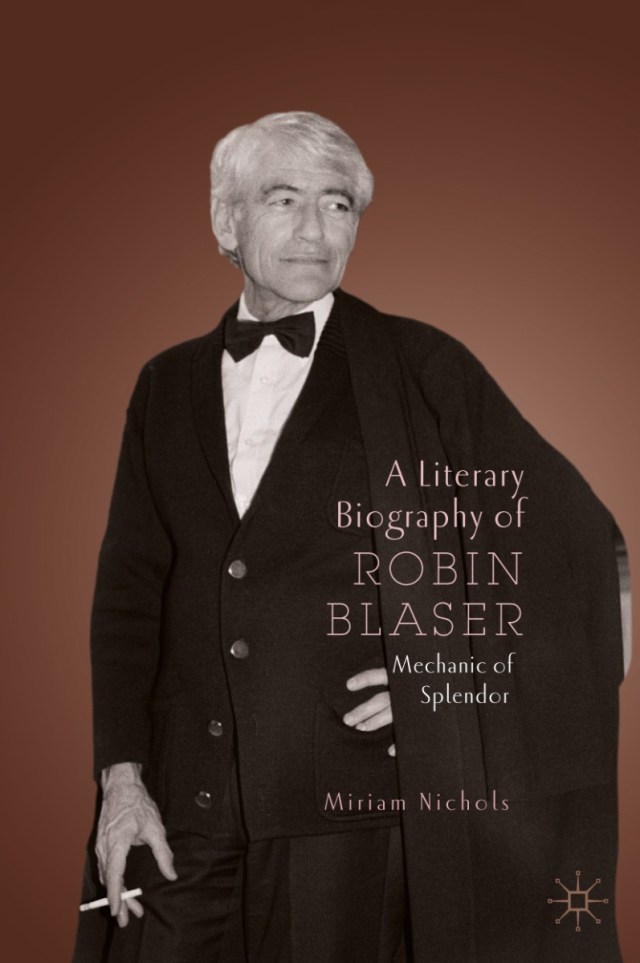 Miriam Nichols’s A Literary Biography of ROBIN BLASER is an affecting examination of Blaser’s primary poetic themes and contributions to New American poetry: namely his “revisionary thinking of the sacred” and his perception-enacted, outward-reaching meditations on the nature of language, sacredness, and the open space poem.

Nichols’s biography vitalizes Blaser, the poet, and his poetry, while also offering particulars of his life in his words, such as the first time he opened “the door to a mysterious man with a mustache, dark glasses, a trench coat, sandals, his feet painted purple for some incredible reason.” That “mysterious man”: Jack Spicer. When Blaser and Stan Persky broke up, Blaser complained that Persky “took the curtains.” Nichols also shares particulars from her personal history as Blaser’s student, colleague, and friend such as “Blaser’s preferred white”—Chablis, and his penchant for shopping—“he found a pink jacket that became a favorite.” All the while, Nichols stays wholly true to her intention to offer a literary biography, pairing Blaser’s “distinctive discourse of poetry” with her distinctive discourse of biography.

The biographer’s method speaks to what she learned from Blaser’s “signature lecture style”: to provide “context as explanation.” Nichols weaves together the personal, social, and sacred in Blaser’s life and poetry, mapping his early family and religious landscape in Idaho; his intellectual landscape in Berkeley; the landscape of his “great companions” in Berkeley, Boston, San Francisco, Vancouver, and beyond—Dante, Duncan, Spicer, Olson, Creeley, et alia—to reveal how Blaser’s work as a poet was “trying to be at home”—in perception and language—“to respond to the events of his times.”

While I read the biography’s fifth chapter, “San Francisco: The Artist of the Beautiful,” I became aware of a background refrain playing in my mind: All of these poets are gone. All of these poets are gone… The poets of the Berkeley Renaissance, San Francisco Renaissance (Blaser was a member of both), the Beats, Black Mountain, and New York School—they are all gone. For me, their still-reverberating loss has as much to do with the lasting effect of their poetic works as it does the artistic community they formed and fostered. These poets took seriously and devoted themselves to poetry; they offered each other deep engagement via fine attention, rigorous reading, open conversation, and cross-media collaborations. To remember that they are all gone is to reckon not only with life’s brevity, but with the fragile and contingent nature of artistic community. As life would have it, events arising in my own life while I read Nichols’s biography brought the fragility of artistic community to bear. “Context as explanation”: A dear member of my writing community and I were reconciling after a slight, and another dear one was dying of a heart attack. Within the writing of this review, I endeavor, as Blaser did in his writing, to respond to their vacancy.

Blaser asserted that poetry retains a record of its “meeting with the world.” I too retain a record of my meetings with Robin Blaser on three lucky occasions in Vancouver, where I witnessed how “in life he lived … poetry,” and I met him in his poetry, where “he made a case for a mode of life.” A biography, according to Blaser’s terms, meant a poet had “done something”; that something is the raison d’être of Miriam Nichols’s devotional biography.