Remember that episode of Star Trek or NCIS where the leaders of all the planets/free nations are gathered in one place, and our pulse quickens as the scriptwriters jack the stakes with an unseen threat of obliteration?

Now imagine the CanPo equivalent ensconced in the glass fortress of The Sylvia’s swank bistro overlooking English Bay and you will have the mise en scène for the launch of the George Stanley Issue of The Capilano Review last Wednesday night. (Our quickened pulses were due more to voluminous poetry off-gassing and the salmon mousse than to any threat of annihilation.)

As the memories unfurled, The Commissioner of Everything (as he is known to his pals) took it all in with a smile and a laugh and an occasional “I did not!”

After Bowering, Reid, Culley and McKinnon read their tribute poems to Stanley from the latest TCR, Stanley took the mic and closed off the evening with six of his twelve “After Desire” poems in the issue. From “At the Pub”: 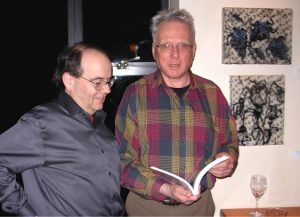