All work is bad: On Cassandra Troyan’s Freedom & Prostitution 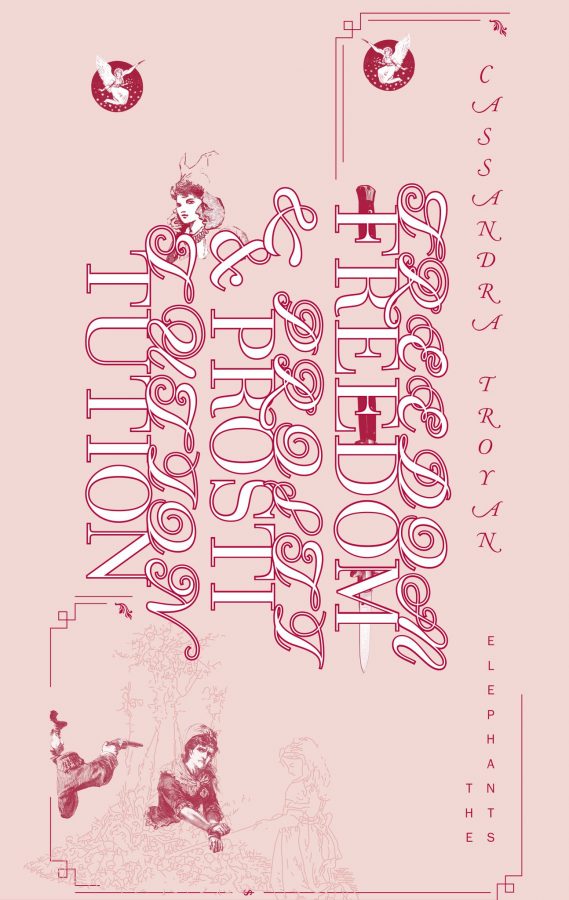 The girl who works / who is she, / always convincing / convincing in capital [1]

There’s a meme out there about sex work that will blow your mind. It plots the evolution of thinking about sex work and ends with the conclusion: Sex work is work, and work is bad. In The Problem with Work, Kathi Weeks provides some historical context to how the thinking on sex work has evolved as well as the language used to describe this work. She maps the linguistic cultural shifts from the use of prostitution to sex work:

“Introduced originally as a way to intervene in the feminist sex wars, the label ‘sex work’ sought to alter the terms of feminist debate about sexual labor. For example, as the replacement for the label ‘prostitution,’ the category helps to shift the terms of discussion from the dilemmas posed by a social problem to questions of economic practice; rather than a character flaw that produces a moral crisis, sex work is re-conceived as an employment option that can generate income and provide opportunity.” [2]

Alternatively and experientially, in Freedom & Prostitution (The Elephants, 2020), Cassandra Troyan provides a consummate response to the above categories until they are completely dislodged from useless feminist ethical dilemmas and can enter another plane of contemplation and interrogation. “Sex work is not a ‘better’ type of labor,” Troyan writes in the note section, “but a proposal for the abolition of all work.” They elucidate the “reality of participation,” and ask, “how to be separate but not a spectacle / how to be included but not a spectacle of appearance.” [3] Here is a poetry book that grounded me in wholeness while synchronously showing me all its collected parts unfolding in unceasing and torrential relentlessness.

In Freedom and Prostitution, Troyan stages a chorus — a body — of sex workers war-crying out the violent conditions of work and revolt. Bodies assemble as stacks of cash, as a chorus with and without tongues, with conflicted politics, as Brown, white, and Black bodies, as sick bodies, and as bodies from beyond the war zone in which they were haphazardly found. When I am made impotent by political sadness, the alembic of Troyan’s words invents time for me to open and move from. There is always the promise of containing all of the fucking shit that makes up a state of being (“To be brutalized / To be beaten / To be gagged …”) within the boundaries of a poetry book in order to command the shit of experience and, in another turn, abolish it.

As FOSTA-SESTA further erodes protections for sex workers, Troyan continues to crowd poetry with camaraderie, exposure, and harm. They collapse the imperious impulse to separate safe space from sexual and gendered violence while acknowledging “the terror of being blamed for this violence,” especially when it goes beyond the typical “asking for it” and alluding to the sometimes-complicated-to-some sexual fantasies that rely on violence to cum. [4] There is no safe space; there is no freedom under colonial capitalism which is why Troyan does not revive the brief 20th century dream of forced destruction of the market from above. Instead, they leave dreams for fantasies and live by one idea: the abolition of work, gender, and money. This is not a safe book and it doesn’t want to be. Still, I feel comforted on this plane of total liberatory politics even when the text brutalizes and bruises. Here Troyan has my full consent.

Troyan repetitively enlists “You” to do, to feel, to be: “Your body under the body of the dead man / You imagine he is a giant spider / liquefying your vitality and sucking it from you.”[5] The persistent use of “You” also has the power to embody stolen lives as well as “an aporia of time” that both test the limits of death by gendered and sexual violence. “You” is directed to fill “a void marked where death belongs” to ensure its for-now corporeality is never understated. To cast a wider net of attentive and embodied witnesses, Troyan begins with the last interview by “the first American female serial killer” Aileen Wuornos (February 29, 1956 – October 9, 2002) before she was executed by lethal injection for killing six men. (Freedom & Prostitution is also dedicated to Aileen.) “You” also becomes initiated as another kind of accomplice as Aileen voices, “You sabotaged my ass, society. And the cops, and the system, a raped woman got executed.” Here “You” is a product of the police state, of a society that continues to promulgate the message that work will set you free. Meanwhile, who is the dramaturg (and the domme?) behind all of these directed feelings and actions? Is it Aileen, the voice of the dead, the poet, the state? Is it the writer of the review who says, stop it. Why are you still crying?

“Candlelight vigils do not avenge the dead,” notes Troyan. Rachel Rabbit White also refers to Freedom & Prostitution as “a vigil” as the book, and I repeat, relentlessly keeps the lives of those lost women, complete with genderqueer, non-binary, trans, and gender non-conforming people, wide awake and reanimated. Here, on stolen and occupied lands of the xʷməθkʷəy̓əm, Sḵwx̱wú7mesh, and Səl̓ílwətaʔ peoples, we are now two weeks past the women’s memorial march where we remember and honour the lives of missing and murdered Indigenous women, girls, trans, and two-spirit people. Replace Green River Killer with Royal Canadian Mounted Police. Replace every death with a statistic. What kinds of translocal possibilities does Troyan’s call for abolition offer?

How might this text intersect with Mercedes Eng’s Mercenary English, which substitutes Troyan’s chorus with a decolonial mapping and collation of settler violence, or form a discussion with Amber Dawn’s How Poetry Saved My Life saving her life? How does it sit with all women involved in Vancouver’s street-based sex trade? How does it sit with me after spreading lips for just the tips in Montréal, alienated from any chorus, because I both had to and wanted to? Finally, how does Troyan’s call for abolition demand answers for the proliferation of people made poor under colonial capitalism, depending on side hustles and gigs to barely persist while the capitalists get rich off disaster?

I refuse to conclude on how the act of writing is a kind of unfortunate freedom where the poet is without boundaries, unrestricted if only by themselves until they exit the page. Troyan seems to inhabit my thought trajectory here when they write: “The cruelty of compulsion / you think you might puke / in your attempt to find a language without boundaries.”[9] With rage and swagger Troyan egresses the impasse, forcing you to exit the page and remember you are a body rubbing off on other bodies declaring war. I’ll end as I started with a line from Troyan:

Freedom and Prostitution can be purchased directly from small press THE ELEPHANTS here.