This piece was originally published in Issue 1.11 (Spring 1977). View the original PDF here.

Why Can’t Men Cry? was premiered by Tom Graff at The Vancouver East Cultural Centre on June 20, 1977. This new “Movement Art Work,” commissioned by the Vancouver New Music Society, is evidence that the Theatre Piece or structured intermedial work is still a viable form of endeavour. Graff brought to its making many years of practice in an aesthetic form which offers him the opportunity for “a fusion of all the disciplines.”

The Capilano Review scripted the performance. 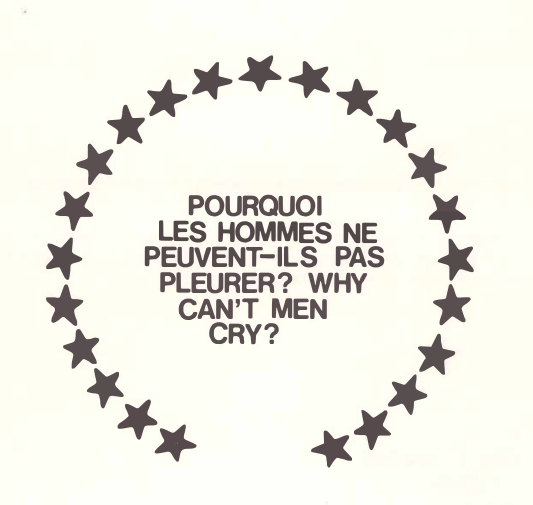 A small white table covered with a red-edged cloth is placed, centre stage, on a silver and white tile (kitchen) floor. Common white chairs equipped with wings confront each other at the table. Behind this still-life arrangement to the left is a black grand piano and a chair with wings; to the right, other necessary musical stands and instruments.

Two quasi-Baroque angel drawings are suspended on pulleys from the backdrop.

A pianist, in tails, enters and takes his winged seat in front of the grand piano.

A man in a white lab coat enters briskly carrying a dictionary, a copy of Chatelaine and a paper roll. He unfurls over the music the paper with its letraset message:

Waving the magazine like a baton, he persuades the audience, Mitch Miller style, to sing along with him.

A woman in black Loretta Young formal dress, gardenias in her hair, enters carrying a grocery bag in her arms.The man exits.He returns dressed in tails with more “groceries”. The couple arranges a row of bags near the right edge of the tile floor. They sit together, briefly, on the winged chairs at the table.

The man rises. He unrolls over the backdrop a starry message (gold on blue) — the familiar French/English injunction (à la CN) against flushing the toilet while the train is stationary.

The couple again sits together at the table. The man and woman rise in order to take cabbages from the grocery bags. They arrange each vegetable on the white floor tiles.

They sit again on the winged chairs.In unison they reach under the table for the sheet music they will sing in duet. When they have come forward near the audience, they execute with almost undeserved seriousness the song:

They turn their attention now to the tile floor. They each nail down the outer leaves of Savoy cabbages into the semblance of the petals of an overblown rose. They come forward once more to sing:

The man exits. He returns to the woman who is sitting at the table with tea-for-two in a Royal Albert “Moss Rose” service. The couple drink tea from cups, but they vie for a single saucer. They select from under the table copies of Chatelaine ( September, 1976) from which they read crucial trivia aloud in counterpoint ( fugue style) from the article:

Upon the removal of the tea service, a winged saxophonist and drummer enter in white tie to accompany the duet:

The couple reposition themselves at the table to read silently from Chatelaine. The man rises and arranges sheets of newspaper into a large square to the right of the tile floor. Each sheet is wafted into the air with balletic grace before it is set into position on the floor. When the square is complete he crushes the sheets into balls, returning them to the bag from which they came, completing the “Newspaper Adagio and Crumple” passage of Why Can’t Men Cry?

The man quickly selects from other shopping bags a stack of 48 magazines — all copies of Chatelaine, September, 1976 — and impatiently slaps them down into a mosaic rectangle to the left of the tile floor. His lady companion then selects from a bag another newspaper and re-enacts the “Newspaper Adagio.” She completes the rectangle, but she does not destroy it. They return, simultaneously, to the winged chairs in order to be serenaded by a saxophonist (but as readily by a violist, a cellist or a ballerina), also winged.

All sing (with passion) :

(The audience is exhorted to sing along)

The principal singers return to their tea, and to the accompaniment of tape-recorded music, pour and drink drops of tea delicately and dreamily from the suspended cups. And when this ceremony of androgynous, non-sexist domesticity is finished, the chorus exits, followed by the other musicians. And after a brief tidy-up (such as one would accomplish at home) the couple leaves.

The man re-enters, winged now and wearing an elaborate kimono. He holds a Japanese umbrella and reads these words from Buckminster Fuller:

“Physics has discovered that there are no solids, no continuous surfaces, no straight lines — only waves; no things — only energy event complexes; only verbs, only relationships . . . “

He turns his back to the audience. On the umbrella is written:

The music for the performance was selected by Tom Graff from his collection of sentimental songs. “Love Me, and the World is Mine” was written by Earnest R. Ball in 1906; “Idle Words” by Stephen Adams in 1898; “The Sweetest Flower that Blows” in the same year by C. B. Hawley; “Please” in 1924 by Joe Cooper. The tape composition composed especially for WHY CAN’T MEN CRY? by Bruce Davis was used throughout as an equivalent for radio (domestic Muzak).

*Incorporated into WHY CAN’T MEN CRY? were a number of props (sculptures), songs and motifs from other Tom Graff “movement works.” Most striking was the inclusion of the “Newspaper Adagio and Crumple” which is a new variation of Russian Revolution (1971).