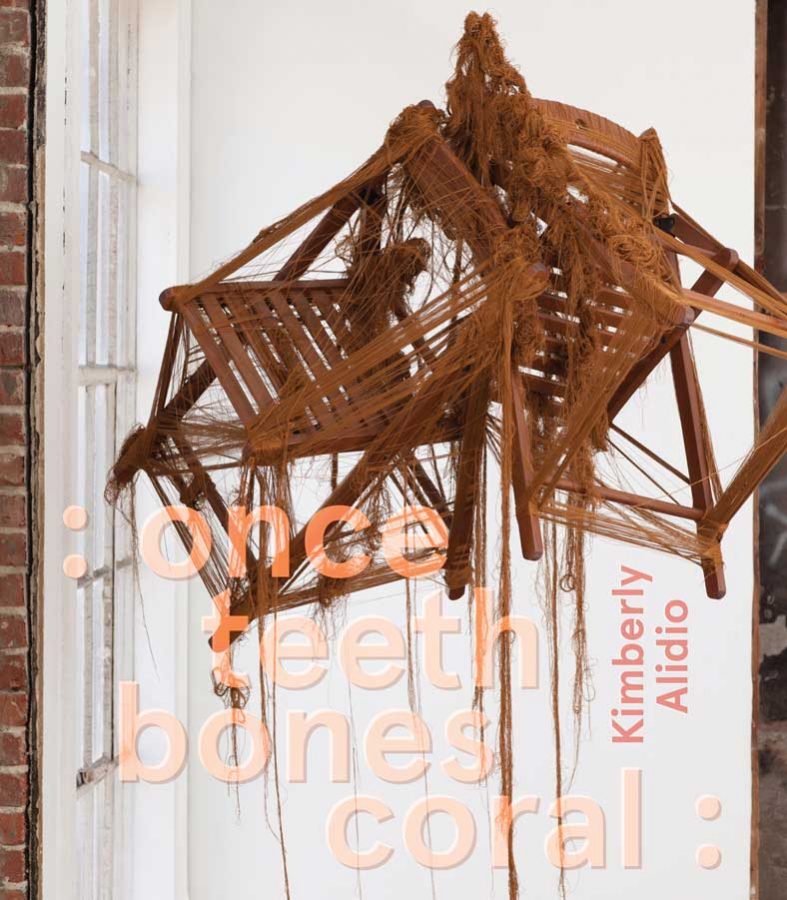 When exhausted, I lose language. Or, it loses me, and I lapse into the waves of vague and overwhelming despondency. It always comes back (language) but, in the meantime, it is a rare occurrence to enter the space of another’s poetics and have the words register. Unexpectedly, it was from this state that I first encountered Kimberly Alidio’s : once teeth bones coral :.

Fading one evening, having let the book of long poems rest unopened for weeks, I picked it up. I stayed with it until “okra” led into “saliva / pus / pussy juice.” The pull was slow, but once I found it, I could rest there: attentive in the spacious associative relations among an assemblage of images. There was a break in the container of the sentence; a curious tension with the habit of making sense. It was all of the words before, their sensed meanings and echoes that made these sensations come alive, like a “clean / walk.” From this state of unknowing, blinking images recognize one another.

Alidio’s writing uses form to sweep the swallowed infinity of the cosmos; the ancestral, cellular reality of the land. The writing shows a respect for the speaker’s gaze that has not hardened into knowing, resisting possession or any certain claiming. I read, “you will smell / me & come back.” Then “night,” then “torso,” then “sliced grapefruit.” Object, site, and concept crowd together, condensing and then breaking out across the page. The poet’s language orbits, winding up to let loose and then plunging with the metallic gravity of a “frying kettle.” These motions disrupt the expediency of progress. Instead, this is a poetry of listening: of attending to one’s environment.

When introducing Alidio during the Fall 2020 Segue Reading Series, Venn Daniel spoke into the screen about language’s edges—of being compelled “to not make or gather meaning, but to sense, feel, be in company with.” In my encounter with : once teeth bones coral : the poet’s confident assemblage did not surface me from the waters of exhaustion. What happened instead was an opening up of space around the experience of reading. I could stay just where I was and still be in contact with texture, the variations of space, emptiness, and density between images. Whole successions of scenes opened out when my eyes relaxed: the mucous-wet tenuous string, exhale of smoke, and the time it takes to come back. All of these elements collaboratively composing one another, and decomposing to become something else. What was once coral becomes bones, teeth, structure. A sequence of perceptions, forever sliding around one another. I didn’t understand their relationship until I paid attention over and over again. Or maybe I still don’t quite understand, and yet a relationship has formed, drawn me in.

: once teeth bones coral : by Kimberly Alidio was published by Belladonna* in 2020.