On Gladys Hindmarch’s Wanting Everything 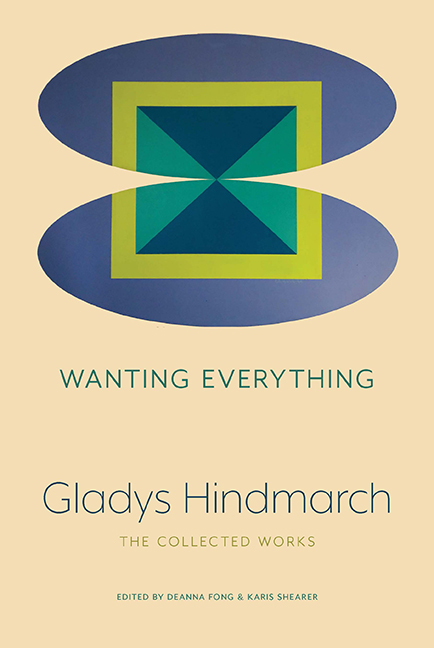 In the introduction to Wanting Everything, Talonbooks’ new collected works of Vancouver writer Gladys Hindmarch, editors Deanna Fong and Karis Shearer tell us that “Hindmarch’s singular practice as an author centres on writing not as a product but as a process—one deeply engaged in dialogue with others, and shaped by processes of revisitation and return.” With this focus on process established, Wanting Everything gathers widely, starting with The Peter Stories (Coach House Press, 1976), A Birth Account (New Star, 1976), and The Watery Part of the World (Douglas and McIntyre, 1988), then expanding past Hindmarch’s published works to include what might typically be considered ephemeral or supplemental work—letters, interviews, reviews, entries from journals and notebooks, and other unpublished work. This equally weighted structure echoes the editors’ stated desire to bridge the gap between the polished book as aesthetic object and the social processes that surround it.

Fong and Shearer argue that Hindmarch’s labour within her communities, literary and otherwise, is invisible unless we reframe what writing is worth collecting. They insist that, reading Hindmarch’s oeuvre, we also reconsider what measuring a literary life might look like by foregrounding labour and care as organizing thematics. Where The Peter Stories transmute nursery rhymes into grounded domestic scenes, the autobiographical A Birth Account proprioceptively translates Hindmarch’s pregnancy with her son Lars into autobiographical prose poetry. The text Hindmarch is perhaps best known for, The Watery Part of the World, is a work novel in the spirit of Helen Potrebenko’s Taxi!; similarly pitched, it dramatizes the minutia of the main character Jan’s workday in the kitchen of a passenger ship travelling around Vancouver Island. Taken together, these three books map gendered relations of labour, bridging unpaid, often invisible care work and paid domestic labour through the understanding that these forms of labour hold spaces and relationships together.

Fong and Shearer frame their inclusion of previously uncollected letters, reviews, interviews, and notebook entries as a way to see the importance of affective labour to Hindmarch’s practice—visible, according to the editors, “in the practices of hosting social gatherings, assembling and preserving community histories and spaces, liaising between community members and institutions, and caring for community members when they are ill or in crisis.” As the book moves through Hindmarch’s different contexts—organizer, friend, parent, writer, student, patient, commune member, teacher—we can see the ways she grapples with the question of how to hold communities and spaces together. Hindmarch writes fondly to and about her friends and peers, people like Fred Wah, Daphne Marlatt, Warren Tallman, Stan Persky, Sharon Thesen, and many others. But even as this material provides a glimpse into the field of care Hindmarch helped pin together, it also reveals the difficulty of balancing this care for others with the scarce time and attention necessary for a thriving writing practice. In a notebook entry from 1984, she writes that “[y]ears ago, when I complained to Warren Tallman that I’d never be able to write again, he said you’ll have to invent a new form, one that allows for interruptions.” Wanting Everything provides an opportunity to listen to the interrupted form of Hindmarch’s oeuvre and, in the process, provide a critical view of care’s relationship to literary and artistic community.

Wanting Everything: The Collected Works was published by Talonbooks in 2020.