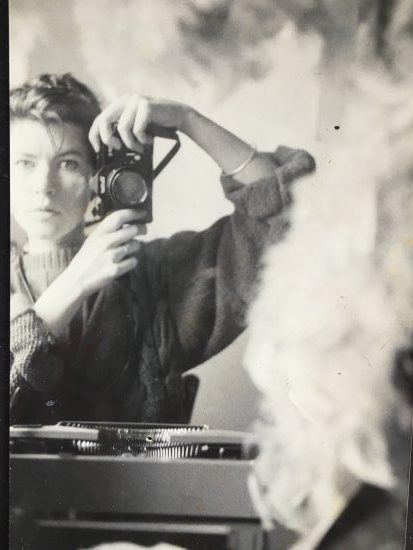 The author has said publicly that The Baudelaire Fractal is not a memoir.[1] The epigraph reads: “These things happened, but not as described.” Nonetheless, on the inside front cover, her young self gazes at us in an old-style mirror-bound selfie. The author has hazel eyes and brown hair. The narrator is named Hazel Brown but has grey eyes.

On the back cover, the book announces itself as “Lisa Robertson’s first novel.” My initial reading was experimental. I wanted to test the hypothesis that this book is a novel. One characteristic of a novel is that you can read it in a single sitting. That’s part of the pleasure, not being able to put it down, as we repeatedly say. It would not have displeased me to find that it is not a novel. However, I did manage to read it in one sitting. The outcome was not simply the result of a wish to succeed at the task. I know this because of the pleasure the reading provided, the story pulling me along beneath the complex spiral of the plot, which is fractal, a constant returning of the same. But this forced approach to Lisa Robertson’s latest book also robbed me of a pleasure. I missed entirely the volupté of slow reading, the depth that the surface entwines in its texture, the kind of reading anatomized here and there in her earlier book Nilling (“I do will myself to submit to the difficulty of a text…”). 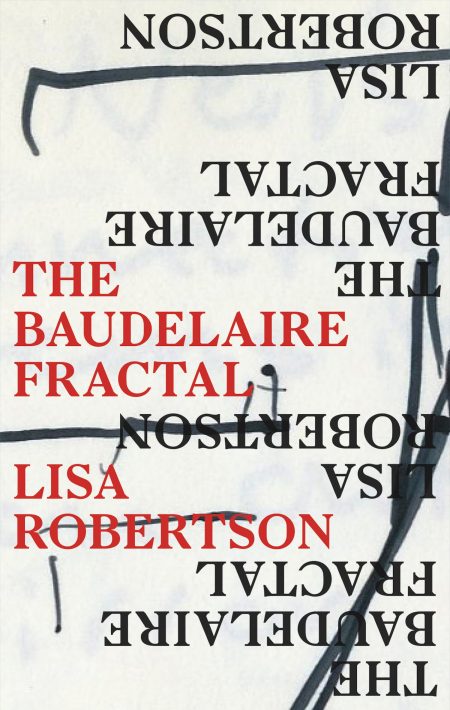 Upon this first reading, a couple of things became apparent to me. First of all, the book’s continuity with earlier works, as the furtherance of a body of work, an oeuvre. For example, with the opening heroic address, “I, Hazel Brown…” (I was there, I read, I invaded cities, I brought back treasures), I fell immediately back into the epic space of Debbie, and the overall “heroization” of the present that occurs there—that which constitutes modernity for Baudelaire (héroïsation is the word Foucault uses,[2] citing “De l’héroisme de la vie moderne,” especially the passage on the black funereal garb of the contemporary hero).  It also, at times, brings forward the prosed automatism of Seven Walks (“We were equally maligned and arrogant, performing our tired doggeries against a sky inlaid with phrases”), and the occasional écritsurlart issued by The Office for Soft Architecture. Or the dreamlike aphorisms of Cinema of the Present (“For you, rhetoric and erotics are irreparably aligned and give support to a needed life”).

Secondly, looking at Nilling again, I realized that The Baudelaire Fractal could also be read as a series of essays. Reading it a second time, I found myself retitling the sections with topical headings, so I could try each one out as an essay: Painting, Rooms, Sex, Bleeding, Tailoring, and so on. But the topics are multiple within each section, and they refract back and forth across sections, so that in the end they elude that kind of labelling. It would have been smarter on my part to concentrate on the titles as they are given, allowing them their slippage, and then to read each section with the title hovering over my attention: “Windows,” “Anywhere Out of the World,” “Vocations,” “Twilight,” “Drunk”…

It also became clear that the apparent central conceit of the novel—the assumption of the Baudelairean authorship, the protagonist awakening in a hotel room to find herself the author of everything Baudelaire ever wrote, as promised on the back cover—was not fulfilled in the way that a novel typically delivers on its publicity. During my second reading, I made the following note regarding this event:

It happens, it is mentioned from time to time, but it is not the plot. It is a figure of reading. It is the topic of the section called “Which is Real?”

My third reading, engaging in a third hypothesis, re-examined the extent of Baudelaire’s presence in the text, testing the ways in which it may have eluded me, like the purloined letter. As it turned out, of course, there was no failed promise at all—Baudelaire is a constant presence in the book, which can’t be read fully without this subtle knowledge, like the author’s own subtle knowledge of her responsibility for his works. But I was right to note that it’s not the plot, not the letter, but rather the envelope.

The novel has three times. The narrator, Hazel Brown, a solitary, sits, in the present, beneath a linden tree eating plums, writing herself, writing to us, in a kind of calmed disquiet, a disquiet about the project of literature that differs from her youthful unknowing only by the addition of this element of calm resignation (“of all stupid art the poem is the most stupid”). Young Hazel Brown, the eventual hero of the narration, newly embarked on the dream of literature, appears to stand centre stage where the main events occur. However, if we consider that she is entirely an object of description, the centre rests with her supposed older self. In an intermediate time, in the middle of the way of this life, as Dante puts it, this authorship is circumscribed by the arrival of the Angel Baudelaire (un ange du mal), not a tutelary guide like Virgil for Dante, but a figure of the prison house of literature whose male wardens her work subverts from the inside, authorship becoming augmentation by way of an etymology that she hints may be illegitimate (it can be found in Benveniste). She says:

To augment would be my work—to add the life of a girl without subtracting anything else from the composition, and then to watch the centre dissolve.

The assumption of the Baudelairean authorship resembles Baudelaire’s becoming-Poe, as he himself describes it:

The first time that I opened one of his books, I saw, with fear and ravishment, not only subjects dreamed of by me, but sentences thought by me and written by him twenty years before.[3]

Baudelaire is, famously, a “feminine man.” In the poem “Sed non satiata” in the “Jeanne Duval Cycle,” he says that he can’t become Proserpina to hold her furious, and by implication masculine, desire at bay. He fears becoming woman. Michel Butor uses the term dévirilisation when describing the effect of the placement of Baudelaire’s financial affairs under judicial counsel—“He was no longer a man, but only a child or a woman. His majority was taken from him…Under his masculine apparel, he was a lesbian.” This is one source of his misogyny. The assumption of his authorship by a woman is a marvelous subversion, even a subversion of his abjection, which according to The Baudelaire Fractal “was defined by the poet’s self-recognition in the grotesque mirror of the social abjection of women.” It’s not a recuperation of women’s writing within the house of literature, but rather an act of property theft or repossession. The project was announced long ago in the words of Debbie’s calling card:

Baudelaire, or his authorship, arrives, appropriately, in the first section of the book, where the arrival is simply described, almost uneventful, mundane as epiphanies go. Thereafter, he wanders into and through each of the sections in repetitions of the same. From the simple address to the reader (Lecteur, mon semblable) to the recovery of Jeanne Duval—the “Giantess” as Baudelaire called her, among other mythical epithets—a counter-version of the story that’s so often been told of her role in his ruination. From the thematic of dandyism, an ethic and a poetic, the opposite of the flâneur, according to Foucault, citing Baudelaire:

…this man…has a purpose more elevated than that of a pure flaneur, a more extensive purpose, and one other than the fugitive pleasure of circumstance. He is after something that we may call modernity. For him it’s a matter of drawing from fashion that which it contains of the poetic within the historic.[4]

“My outfits and their compositions,” we’re told, “were experiments in syntax and diction.” (The hilarious tale of the moth-infested 19th century frock coat, bought at a flea market, is a self-mocking of this “dandiacal woman” concept). To a series of loving, careful descriptions of paintings, in the manner of Baudelaire’s Salons: Courbet’s and Deroy’s early portraits of Baudelaire; Courbet’s allegorical tableau “The Artist’s Studio”; Deroy’s “La petite mendiante rousse”; Dürer’s “Melencolia”; Manet’s portrait of Jeanne Duval; Delacroix’s epic biblical depictions in Saint Sulpice and his watercolour of an unmade bed.

In a subsequent reading, the omnipresence of Baudelaire could easily slip back into the distance, like the unobtrusive interweaving of a minor theme. I could regain the innocence of my first, idle summertime reading and read it once again as the amusing comic novel it sometimes appears to be. Or I could read it more thoroughly in terms of the proper noun it applies to itself: fractal. In such a reading the comedy would be darker, involving a repetition of the same in which the same is not readily identified, until its accumulation culminates in disgust. (“Yet I am completely disgusted with literature. That’s why this is erotic comedy”). Above all, however, this book is governed by a poetic. The more you pursue it, the more you will find it to be unreadable, which is to say inexhaustible. This is the principle of poetry, that it slows reading down, so much so that the reading can never be completed.

The Baudelaire Fractal by Lisa Robertson was published by Coach House Books in 2020.