In the collectable Fall 2011 issue of TCR, Donato Mancini has interesting things to say about re-reading. “But ‘A poetry collection is like a record collection’ (R. Maurer). Bafflement, puzzlement, difference, strangeness, unfamiliarity raise curiosity, invite longterm engagement. ‘Love don’t come easy’ (P. Collins). Poetry is not a consumable. ‘It’s a game of give and take’ (ibid).”

I think that Maurer and Mancini have it nicely right here (except that to my knowledge those quoted song lyrics have to be attributed to The Supremes, if we are talking performers, or Eddie Holland if we are talking writer.)

And/but I think that we could spend a little time on the word “collection.” Recently we heard Michael Audain talking about the exhibiting of “The Audain Collection” at the Vancouver Art Gallery. He said that he did not think of his art purchases as a “collection,” but rather as repeated instances of the great joy in buying a painting one admires. But remember what Ezra Pound said about art galleries and anthologies? That when you view a room full of paintings you learn about each of them by its proximity to others. This will work whether you have a room full of Picassos, or of quattrocentro Biblical scenes. You can see where he was going re anthologies.

So what about my record collection? Well, one has made an effort to acquire all the great quartets of Beethoven and Coltrane, of course. But there is stuff on those shelves that I have not “added to my collection.” I don’t know how that Neil Diamond album got in there.

You can see Maurer’s point. The poems in a collection, especially if it is not just a hurried hodgepodge, cannot help being related to one another, and like music are likely to grow by being listened to more than once. Maurer means that you don’t just rip through a book of poems as if it were an airport novel. You don’t even have to (re)read the poems in order: you can listen to Beethoven’s late quartets and then go back and turn on an early one.

Who made up that phrase, the “canon of representation”? Years ago I thought that “representation” referred not to the art but to the artist. Now Mr. Mancini may have got me thinking that it refers to the reader of the painting or book. 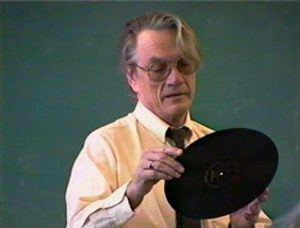 Image of Bowering with LP — a video still by Aaron Vidaver.