from Head Out: (A letter, essay, poem – for C.S. Giscombe

Twenty-one years ago: you in Normal Illinois and me in Prince George, B.C. – an unlikely geographical connection, your voice on the phone – smooth, subdued, quiet, intelligent and polite – introducing yourself via George Bowering’s suggestion that you contact me – you a poet with a project, making a simple request: you needed an invitation and a letter to support your plan to track the black explorer and miner John Robert Giscome’s journey and life in the mid 1800’s viz. his presence in B.C., based on your serious premise of a family blood tie.
J.R. Giscome / C.S. Giscombe

And within a year, there you were in the parking lot of the Downtowner Motel in Prince George. Did I wave first or did we wave simultaneously? (we gave no physical clues for identification. I knew from scant historical information that J.R. Giscome was black/you couldn’t be white (I’d have been very suspicious if you were!

the   blood ties.
now, here, your return via John Giscome to begin the long journey – almost a decade ahead of you – into the poem:
Giscome Road
our immediate connection / spontaneous
difficult talk/ easy talk.  We, familiar with similar materials or lack of them, and questions – and a sense of a share in a cursed journey, if it were not for the almost promise that its very activity is what could equally save anyone on it.
We talked
into the night – back porch beer epiphanies/ and over the years of our talks to a kind of necessary knowledge – as if by articulating a shared skill, concern, and practice, each step ahead be taken more assuredly – give simultaneous courage in the foolish prompt to risk

dumbly /  head out
as early miners packing each thing for a journey into vast unknowns, up the physical canyons, thru miles of bush I can barely walk a block thru (Cecil, that day on the Giscome Trail in the sheer and wonderful context of the “historical” moment, being with you, I was also being bled by many species of carnivorous bugs – and in fear noted trees shredded by recent hungry bears.  How far did we go until we got the idea: this, now, here, the literal Giscombe Trail/  his portage on
to Summit Lake/  the water
shed divide at 54 40 – longitudes and latitudes of history.   I watched
you swim out    quite a way.
our subject?   What tools, what corporeal/ mind/ necessity let us start with an agreement, spit out without a thought, yet a thought we continuously return to by virtue of its curiosity – to a “theme” of sorts: “this is a place we decided, but there’s nothing here.
right    and    wrong

the name’s the last thing to disappear 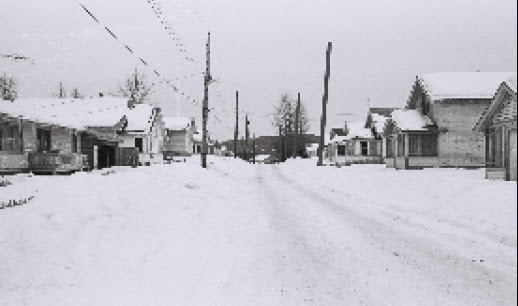 no more Saturday nights there

to watch the mill.   he knows nothing
can be carried easily
away.   but the people willingly

(some houses are livable yet
bulldozers to scrape it all away,  as if some natural
cycle is at work

but   people   people lived
there
as C.B.C. goes on:
we are capable of understanding
the culture . . .

as the local radio goes on jingling
and jangling
the nerves:
you’ve got 55 seconds
to come out & see what

Note: This poem was written shortly after the town of Giscome was evacuated and bulldozed. A local radio station in Prince George, most likely CKPG at the time, was running advertisements for the Hudson’s Bay Company’s “Bayday” promotion which involved a roving car equipped with a loudspeaker that randomly stopped at various houses at various times of the day. If a “lucky” resident happened to hear and respond to the bullhorn line:  you’ve got 55 seconds etc. . . .  they’d win some kind of prize. My sense was that if someone in Giscome came into the street for the “prize” they might have had their house bulldozed while their backs were turned. The italicized radio lines were jotted and spliced as I wrote.