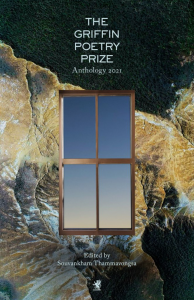 In her preface to the 2021 Griffin Poetry Prize Anthology (House of Anansi Press, 2021) Souvankham Thammavongsa turns briefly to address the many writers who entered the contest but were ultimately not chosen: “You have no idea how close you came,” she writes. The distinctive warmth of her narrative voice, which won her last year’s Giller Prize for her short story collection How to Pronounce Knife, now draws the reader to the judge’s side to overhear a beautiful, if somewhat unusual, téte-á-téte with all the contestants not included in the book: “however meaningful or meaningless that is to you — you can’t ever know just how close.”

Getting “close,” which relates both to intimacy and the opposing notion of falling short, is inferred throughout the anthology. From Victoria Chang’s Obit (Copper Canyon Press, 2020), which adopts the obituary as a form for exploring the profound singularity of grief, to Yusuf Saadi’s Pluviophile (Nightwood Editions, 2020), in which a poem considers whether the dead mourn the imperfection of living, the poets collected in this year’s shortlist seem to be calling across the gulfs that exist between each of us, echoing out in a struggle to share in subjectivity. At the same time, the way closeness by definition never becomes contact, the anthology points to the ways collectivity is unsettled by the very failing to perfectly translate, which is what brings art to life; what makes beauty happen. “[O]ur sadness is plural,” writes Victoria Chang in Obit, “but grief is singular.”

At a length of merely five lines, Yi Lei also communicates the “unfathomable distance” from closeness to true understanding in her 1987 poem “As Clear and Thus as Virtuous as Glass,” translated from the Chinese by Tracy K. Smith and Changtai Bi:

I am as clear and thus as virtuous as glass.
To see through me, you need only glance.
Smash me to shards with the rap of a fist.
But to reach me, to really enter in,
You must travel an unfathomable distance.

Born in the Lao refugee camp in Nang Khai, Thailand, Thammavongsa knows the value of translation and the significance of distance. She is also well aware, as Walter Benjamin put it in 1923, that “[literature] ‘tells’ very little to those who understand it,” the “essential quality” of a literary work being sensed rather than “imparted” or “stated”— or is spoken in the tongue of the “one true language.”¹ Thammavongsa’s selections reflect both a sensitivity to that elusive quality present in her own literary works, as well as a deep respect for dialect and the intricacies that keep a language and literary work alive.

As Griffin Prize juror, alongside Ilya Kaminsky and Eleš Šteger, and as editor of the international shortlist, Thammavongsa placed less emphasis on distinguishing the laureled few from the rest as she did on celebrating the mechanisms of craft and language in each work. The shortlisted poets — four international, three Canadian — each catch and refract into prismatic distillations something of the moment we are all wading through together, at a distance. Last year, as she accepted the Giller Prize, she thanked her editor Anita Chong, saying, “Not bad for two girls who were in ESL.” Now, as one of Canada’s leading literary figures, Thammavongsa reminds us that praise isn’t just for prizewinners — a lesson she learned at her first Griffin Prize party, when, bending down to tell Adrienne Rich the title of her collection, she heard the older poet say: “I remember that book.”

The 2021 Griffin Poetry Prize Anthology edited by Souvankham Thammavongsa is published by House of Anansi Press.