In this month’s edition of “From the Archives,” we’re taking a look at Issue 3.13 (Winter 2011): Manifestos Now! Edited by Brian Ganter and Jenny Penberthy, the issue includes prose, poetry, and art that, as Ganter writes in his preface, “fruitfully explore[s] and expose[s] the promises and limitations, the continuing risks, and possible futures of the manifesto.” Nikki Reimer‘s “manifest/later” is a defiant yet grounded critique of the excesses and inequalities of the twenty-first century, her words backgrounded by bleached-out photographs of shipping containers and high-rise apartment buildings. Next, Participants in the Humanities 101 Writing course run by Margot Leigh Butler and offered by the University of British Columbia to residents of the Downtown Eastside/South ask, “What Do Downtown Eastsiders Want?” in their repudiation of gentrification and forced displacement. Finally, artists Sabine Bitter and Helmut Webber, whose work “Super Students #1” graces the cover of the issue, bring to life a series of student protests through drawing, photography, and collage. Check out all three works below.

Participants in Humanities 101 Writing Course
“What Do Downtown Eastsiders Want?”
from Issue 3.13 (Winter 2011)

Some Keywords of DTES Displacement & Gentrification, compiled by the Hum Study Group 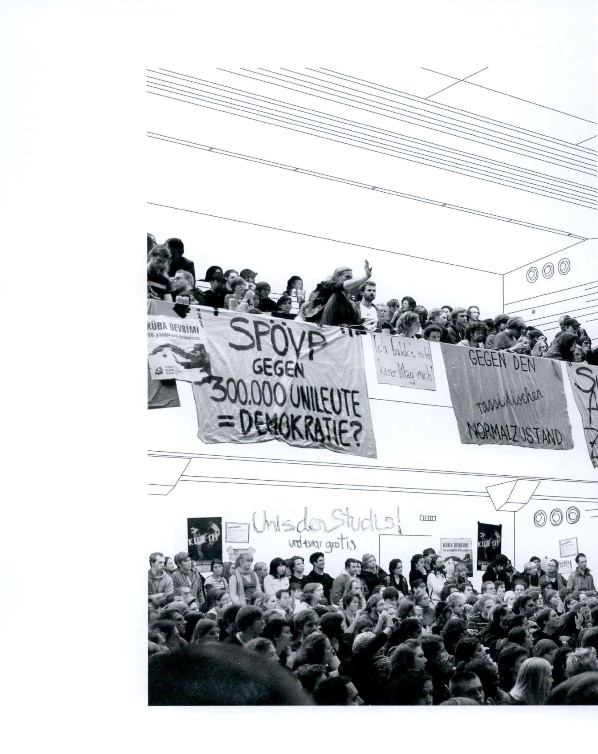